Hamster Vs. Guinea Pig: Which One To Pick As A Pet?

What appears to be a large-sized version of the other isn’t so. Hamsters and guinea pigs are two separate species with unique personalities. So if you are trying to solve the hamster vs guinea pig equation, we’ve got some handy tips for you.

What Is A Guinea Pig?

A guinea pig is a rodent belonging to the Caviidae family. Caviidae (known as a “cavy”) are native to South America. Their lineage can be traced as far back as 20 million years, according to the University of Michigan’s Museum of Zoology.

Cavies not only include guinea pigs but also the capybara and some hares. Guinea pigs are oddly shaped and appear to look like chubby, overgrown hamsters. They are found throughout the world, where they are kept as pets and, in some countries, as a source of food (Ecuador, Peru, Bolivia.)

How Are Guinea Pigs and Hamsters Different?

Not only do guinea pigs differ in size compared to a hamster, but they also have different behaviors, some of which are a bit quirky. Let’s take a look at what those are.

Guinea Pig Vs. Hamster Difference At A Glance

Comparing a Hamster vs. Guinea Pig

So, now that we know a guinea pig is larger than a hamster, we’ll hone in on the details of each to get a better idea of their differences.

When selecting a pet, it’s our desire that they’ll be around for a long time. However, hamsters have a short lifespan compared to other pets.

So, what is the lifespan of a guinea pig compared to a hamster? This may come as a surprise, but a guinea pig lives up to 14 years. When you compare that to a hamster, that’s pretty long. In fact, it’s about five times longer.

Cornell University published an article on the longevity of hamsters. The article delves into how the sex of a hamster played a role in how long a male or female hamster lives. Female hamsters live an average of about 15 months. Males, on the other hand, live about 19 months. The lifespan within a certain hamster species differs between one another.

Guinea pigs can grow to be as long as 10 inches and weigh up to 2 ½ pounds. Their odd physique and shape look very similar to a rural propane tank or an overgrown capsule. You can’t help but chuckle at the funny appearance.

Hamsters can grow to be 1-7 inches. Syrian hamsters would be more prone to being on the large end of the spectrum and Roborovskis being on the small end. Dwarf hamsters are the smaller hamster species ranging from 1-3 inches.

Our eyes are drawn to the physical features a potential pet has. Every pet-parent-to-be has their own personal preferences that range from cute and compact to so-ugly-you-feel-sorry. Some prefer something they can cuddle up with, while others don’t mind a tiny pocket pet.

Let’s see what we can narrow down between a guinea pig and a hamster as far as physical features go.

The coat of a guinea pig comes in different lengths, colors, and patterns. Guinea pigs can have long hair with pink eyes, or short hair with a patchy pattern, or have curly or straight hair. Some guinea pigs with long hair look like little walking wigs!

Hamsters (like the guinea pig) come in short or long hair and feature numerous coat colors and patterns that include tan, white, gray, black, or a combination. Some hamster species feature stripes down their backs, wavy/curly hair, or hairy feet. Their eye color may be black, red, pink, or dual-colored.

It helps to know what to expect in how a potential pet will act. The last thing you want to do is get a pet that isn’t the right fit for you and your family.

Guinea pigs are social animals and love being around their owners. They make a great starter pet and interact very well with children. Their quirky antics make them entertaining. If you are looking for a pint-size cuddler, you’ll find it in a guinea pig.

As far as a cagemate goes, a guinea pig tends to get lonely because they are used to living in colonies. Getting a pair of same-sex guinea pigs is recommended.

There is little handling/taming required for guinea pigs. However, you will need to provide them time to acclimate to a new environment when bringing them home. Just beware that one of their quirks is freezing in place when frightened, or unsure of something. They can stay like this for up to 20 minutes or more.

Guinea pigs are active 20 hours out of a day, so don’t expect them to sleep a lot. Their active time usually includes a 10-minute respite here and there to chill. Lastly, guinea pigs are overall hardy pets and are considered to be a good match for children holding and picking up.

Hamsters are, for the most part, solitary creatures and prefer not to share their cage with another dweller. Cuddling and holding them isn’t one of their favorite things, although with a lot of handling/taming, you may get your hamster comfortable with being held for prolonged periods.

A hamster is genetically programmed to be high strung, easily stressed, hypervigilant, and constantly in motion (unless asleep.) In comparison to guinea pigs, hamsters require a lot of handling/taming.

Caring for two different species of animals comes with different responsibilities and needs. Those things come into play when selecting a potential pet.

Guinea pigs are hardy pets and very low maintenance. However, there are a few things to note before bringing one home. They don’t do well around cats or dogs and should never be placed with or near rabbits. Rabbits carry diseases that are easily transmitted to cavies (guinea pigs.)

A noteworthy thing to know about guinea pigs is they do not tolerate heat. Because of this, they should be kept in an area where the temperature is 65-75 degrees (F.) They become overheated easily.

A cage for guinea pigs should have a solid floor, be large enough for them to move around in, burrow, and explore. Guinea pigs must have time outside of the cage daily in an area to run around in. Pet playpens are recommended to provide a safe/confined area to enjoy.

Access to fresh water, clean bedding, and a nesting box is a must. Daily spot cleaning and refreshing the bedding is necessary to keep your guinea pig healthy and clean. A complete cage cleaning should be done 1-2 times a week.

Vitamin C deficiency is something all guinea pigs can easily suffer from, so it’s important that you give them daily Vitamin C supplements.

The teeth of guinea pigs are in a constant state of growth. Because of this, you’ll need to provide them with daily dietary hay to chew on. They are well-known chewers and need things to chew on, such as toys (designed for guinea pigs.) Failing to satiate their chewing needs can result in impacted teeth.

A high-quality diet should include pellet food designed for guinea pigs. Treats (similar to what you would feed a hamster) are also recommended.

Hamsters require similar care with a few tweaks compared to guinea pigs. Handling/taming hamsters takes time and a lot of patience. Dwarf hamsters must be handled with care due to being very prone to jumping.

Hamsters don’t need a playpen to run around in, but they do need human interaction outside of the cage. Placing them inside of a pet playpen can be frightening to them with the vast amount of open area. A smaller, confined area would better suit them for time out of the cage.

When it comes to cage bedding, hamsters require more bedding to burrow in. Daily spot cleaning is necessary to avoid a soiled hamster that results from tracking through dirty bedding or running through excrement in tubes.

Just like guinea pigs, hamsters should be on a pellet diet. The occasional treat is also enjoyed. For a more comprehensive list, visit our blog article What Can Hamsters Eat?: A Data-Backed Guide To Hamster Feeding.

Which Pet Is Easier To Take Care Of Hamster Or Guinea Pig?

Hamsters and guinea pigs equally require the same care when it comes to their cage needs.

Both have special dietary needs. Guinea pigs require less handling/taming and are not prone to be jumpers, whereas hamsters are just the opposite.

Any animal will bite when it feels threatened or is in pain. Until a guinea pig or hamster gets to know you, there’s the risk of being bitten. Hamsters tend to bite when startled or woken up.

What Are The Pros and Cons Of Having A Guinea Pig?

Guinea pigs are larger, hardier, and friendlier to have as pets. They should have a cagemate to avoid becoming lonely, which would double the amount of care required. Impacted front teeth are a concern requiring you to keep them supplied with dietary hay and things to chew on. Lastly, if you have a cat, dog, or rabbit, a guinea pig isn’t the right fit for your household.

Guinea Pig Or Hamster: You Decide

If you’re looking for a starter pet or have small children, a guinea pig fits the bill. Hamsters (especially dwarfs) should be reserved for adults because they are fragile and require extra care. So, which one should you pick as a pet: hamster vs. guinea pig? You decide. 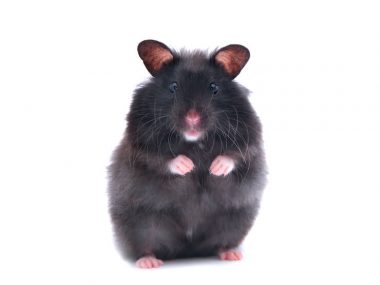 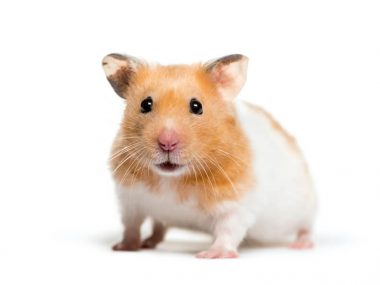 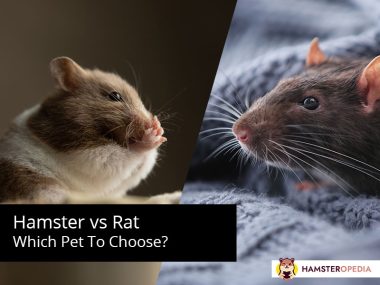 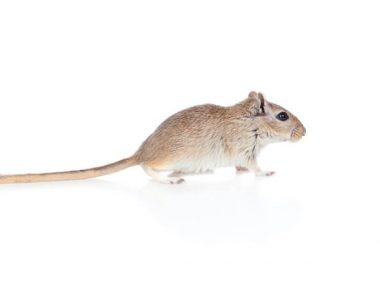